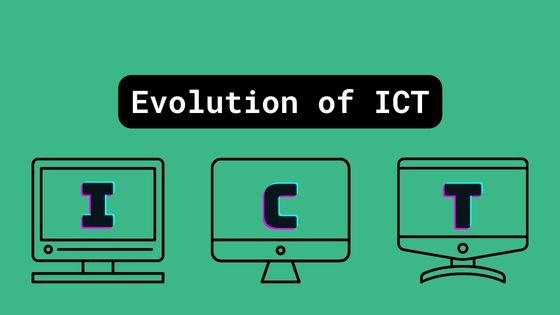 The evolution of Information and Communication Technologies (ICT) over the past two decades has been nothing short of revolutionary. The development and widespread adoption of the internet, mobile devices, and social media has transformed the way we communicate, access information, and conduct business.

The history of the evolution of ICT (Information and Communication Technology) can be traced back to the invention of the telegraph in the 1830s, which marked the beginning of the electronic communication era. The telegraph allowed for the rapid transmission of messages over long distances and was widely used in the 19th century for business and government communication.

In the early 20th century, the telephone and radio were invented, further revolutionizing the way people communicated. The widespread use of these technologies led to the development of new forms of communication, such as teleconferencing and broadcast media.

With the advent of computers in the 1950s, the world of ICT began to rapidly evolve. The first computers were large, expensive machines that were primarily used for scientific research and government projects. However, as technology advanced and computers became smaller and more affordable, they began to be used in a variety of industries, from manufacturing to finance.

The 1970s saw the introduction of the first personal computers, which were designed for use by individuals in their homes. This marked the beginning of the digital age and the widespread use of computers in everyday life. The 1980s and 1990s saw the emergence of the internet, which revolutionized the way people communicated, shared information, and accessed information.

In the 21st century, ICT has continued to evolve at a rapid pace. The widespread use of smartphones and other mobile devices has made it possible for people to stay connected and access information from anywhere. The rise of social media has also made it easier for people to share information and stay connected with others. Additionally, the internet of things (IoT) has made it possible for machines and devices to communicate with each other, creating new opportunities for automation and data analysis.

In the early 2000s, the internet was primarily accessed through desktop computers and laptops. Broadband internet was becoming more widely available, but it was still relatively expensive and not yet widespread. Online services such as email and instant messaging were becoming increasingly popular, but social media was in its infancy. Websites were primarily static and not yet optimized for mobile devices.

The introduction of smartphones in the mid-2000s marked a significant turning point in the evolution of ICT. The first iPhone was released in 2007, and it was quickly followed by other smartphones such as the BlackBerry and the Android. These devices made it possible to access the internet, email, and social media on the go, greatly increasing the convenience and accessibility of these services. The widespread adoption of smartphones also led to the development of mobile apps, which made it possible to perform a wide range of tasks on a mobile device, from ordering food to banking to booking travel.

The rise of social media in the late 2000s also had a significant impact on the way we communicate and access information. Platforms such as Facebook, Twitter, and LinkedIn made it easy to connect with friends and colleagues, share information and news, and stay up-to-date on current events. Social media also played a major role in the Arab Spring, and the use of social media as a tool for political activism and social change.

The cloud computing, big data and analytics and the Internet of Things (IoT) are some of the most recent developments in ICT that have had a major impact on the way we live and work. Cloud computing has made it possible for businesses and individuals to store and access data and applications remotely, without the need for expensive hardware and software. This has greatly increased the flexibility and scalability of IT systems, and has made it possible for small businesses and start-ups to compete with larger companies.

Big data and analytics have enabled organizations to collect, process and analyze large amounts of data in order to gain insights and make better decisions. This has led to the development of new business models, such as personalized marketing and predictive maintenance, and has also had a major impact on industries such as healthcare, finance, and transportation.

The Internet of Things (IoT) is a network of devices and sensors that are connected to the internet and can communicate with each other and with other devices. This has the potential to revolutionize a wide range of industries, from agriculture and manufacturing to healthcare and transportation. By connecting devices and sensors to the internet, it is possible to collect and analyze data in real-time, which can be used to improve efficiency, reduce costs, and create new business models.

In conclusion, the evolution of ICT over the past two decades has been nothing short of revolutionary. The development and widespread adoption of the internet, mobile devices, and social media has transformed the way we communicate, access information, and conduct business. The recent developments in ICT such as cloud computing, big data and analytics and the Internet of Things (IoT) have had a major impact on the way we live and work, and are likely to continue to shape the future of ICT.

Overall, the evolution of ICT has had a profound impact on the way people live and work, and it continues to shape the future of communication and technology.